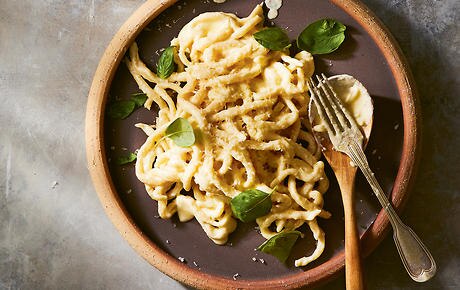 The sauce doesn’t even need its own pan – it is simply warmed over the pot as the pasta is cooking – making for a simple meal that doesn’t require you to stand at the stove for long periods of time. Originating in Tuscany, pici are a like a fat spaghetti. The exact recipe for the dough varies from family to family – sometimes made with semolina flour, sometimes with an egg added. They are very textural and so comforting to eat. There are a few sauces that traditionally accompany this pasta shape – most often a simple garlicky tomato one but also one of toasted breadcrumbs – which are both delicious. However, I’ve been making variations of this lemon sauce since I was 16, after reading a similar recipe in a River Cafe cookbook. I have had great success using a combination of pure cream and mascarpone, and an equally fine substitute is, of course, dried pici, spaghetti or bucatini (use 320 grams for four people). I like my sauce quite zingy, so I’ve left the amount of lemon up to you. To adjust – start with one lemon and add the rest if you like…Read More

Soy and ginger fish with rice

23 Indigenous American Food Activists, Educators, And Other Figures To Know

The Best Backcountry Camping Gear for 2020

The 25 Best Places to Spend Christmas in the USA